The first step toward creating an effective performance testing strategy for microservice-oriented applications is to understand how an MOA works and how it differs from a monolithic application. Once a solid understanding is in place, adhering to a few basic rules of thumb when considering testing an MOA will help make devising a strategy a much easier undertaking.

The Rise of Microservices

Microservices are not going away. Recent data confirms that interest continues to grow. They’re fast to revise and deploy, cost-effective to run when hosted with an industrial-strength cloud provider. Google Trends reports that the interest in microservice has increased dramatically over the last five years.

If nothing else we’re going to keep seeing a dramatic proliferation of microservices, particularly when the Internet of Things (IoT) interactions become the dominant computing activity on the web. Companies who fail to devise performance strategies for microservice-oriented applications do so at their own risk.

In a traditional “old school” monolithic application, all services exist/share memory in a single machine. A more modern approach is to distribute services over multiple machines where each lives in the same rack or at least the same data center. Whether one or many, all the services in a monolithic application know how to find the others required. Also, the interservice latency can be measured in nanoseconds. (See Figure 1 below). 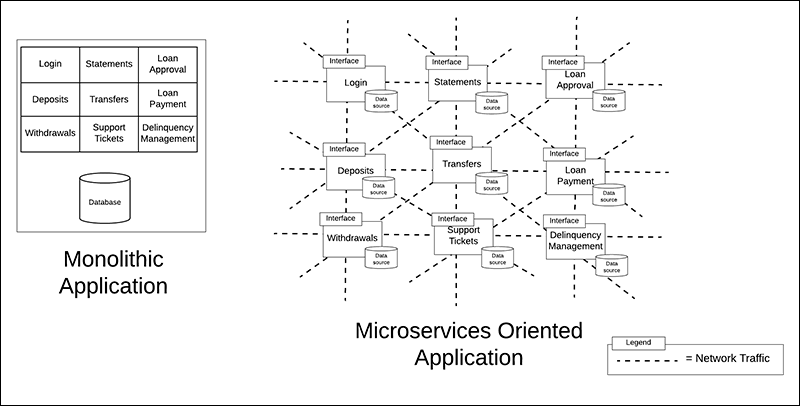 Microservices are highly distributed, sometimes across multiple datacenters. Some nearby; others might perhaps spread across the globe. Each microservice is highly autonomous and publishes a distinct interface (which can change in a moments notice). Also, a microservice carries its data and has its own set of contextual semantics. The latency between services is measured in milliseconds.

The deployment unit for a microservice is a container. For companies opting for serverless computing, the deployment unit is the function (e.g., AWS Lambda functions or Google Cloud Functions). The reason for the container/serverless preferences is that they are much faster to deploy than a virtual machine. They also “spin up” quickly. As mentioned, the microservice brings speed and autonomy to deployment. In a monolithic application, no single component, for example, can be released independently of the entire app (see withdrawals for the banking app shown above, Figure 1). In an MOA, any microservice can be released at any time. Thus, each team responsible for developing, testing, and supporting a particular microservice enjoys its own release cycle. Such independence is valuable. But, it also makes microservices more challenging to manage. Still, given the benefit of quickness to market, companies who’ve embraced MOAs are more than willing to tolerate the increased management complexity.

Do you want scale? Consider that Netflix reports 4,000 deployments/day.

Rules of Thumb for Establishing an MOA Performance Testing Strategy

Now that we’ve reviewed how microservices work let’s take a look at some considerations when establishing a viable strategy for performance testing them.

As previously stated, a fundamental premise of microservice development is that one team is responsible for every aspect of the service. This includes the product (yes, the microservice is a product) & project management, development, testing, release, and support. Hence, the design and execution of performance tests for the service need to be done by the team owner of the service. Also, this team is responsible for test results publishing.

The questions this brings: How does the organization know that the microservice team is conducting the tests in a meaningful way? What are the criteria used for passing/failing? Luckily, this is where Service Level Agreements show their value.

Companies spend money supporting microservice teams because they want valuable results that add value to the bottom line. As the saying goes, “if wishes were horses, then beggars would ride.” Many a time, the reality stands in the way of achievement.

Sometimes the distance between desire and reality is vast. Others, it’s close together. The trick is to align passion and truth in the same place, same time. The way to do this is through the Service Level Agreement (SLA).

The SLA is how the infinite demands of desire and the troublesome restraints of reality get transformed into a workable solution. A well defined SLA is indispensable, particularly when it comes to verifying microservice behavior by way of performance testing.

While the microservice team is best suited to determine what is possible in terms of service behavior and verification (through designing/executing its performance tests), it does not live in a vacuum. A microservice is one among many serving single or multiple MOAs. At some point, the service needs to fulfill the “big picture” performance behavior (via SLA).

A well defined SLA creates a set of shared expectations which serve as the underlying principles for developing, testing, reporting, and improving a particular microservice. The clearer the SLA, the easier it is for the microservice team to create, execute, and report on performance tests in a way that accurately meets the needs. A loosely defined SLA creates too many ambiguities in the development process.

Enable Distributed Tracing Throughout the Enterprise

In the old days, when activity between components occurred in shared memory or among a set of well-known machines, monitoring app behavior involved nothing more than installing monitoring software on the machines in which the apps/components ran.

MOAs are different. Containers and serverless functions that realize a particular microservice get spun up and down to meet the needs of the moment at speeds well beyond human capabilities. The only way to observe this type of temporary behavior is to make sure that distributed tracing is enabled throughout the enterprise.

Distributed tracing means that an agent is installed on a virtual machine(s) and containers that are hosting the service. (Functions in a serverless computing environment are hosted in a container.) Meanwhile, an agent observes environmental activity, sending data back to a master collector who keeps track of and reports on all agent activity.

Modern practice is to install an agent on a host automatically at a host’s creation time. Again, a particular host can be a VM, a container, or even a physical computer. Automatic installation ensures comprehensive tracing even in transient situations.

Identifying and adopting a particular distributed tracing framework is a big decision outside of the microservice team. Such judgment has to be made at the enterprise level. Otherwise, a company will never have the depth and breadth of performance test data needed to perform proper analysis and effective troubleshooting.

If you don’t have distributed tracing in force, the scope of your performance testing activity is going to be limited.

Test the Part. Test the Whole.

Microservice-oriented Applications are synergetic. They combine the behavior of a multitude of microservices into a unified whole greater than the sum of its parts. A single microservice has minimal value. It’s worth is realized when combined with the behavior of others.

A paradox exists. Testing of the whole means that you lose access to the granularity revealed when testing the part. If you examine only a piece, you can’t see the whole. So, when determining a test strategy for microservices, the wise approach is to performance test both.

All tests need to be conducted according to well-defined Service Level Agreements that are the result of negotiations between teams overseeing the microservice and the enterprise-level designers who will be consuming those services.

Finally, the MOA environments must support distributed tracing. Without access to operational data correlated from all microservices regardless of location, performance test results will lack the necessary detail for adequate analysis and efficient troubleshooting.

Microservices are here to stay. They allow timely, independent release cycles. Having a viable test strategy encompassing the entire scope of microservice-oriented applications and the microservices themselves is critical for companies who want to bring code to market in an accelerated way.