For those starting to know how to fit performance testing into an Agile model, hope this blog provides you with basic information to start with continue to work and refer. We have heard of Shift Left, Shift Right in Devops world or otherwise. Although to me adapting to Agile methodology it was a Life shift in a performance engineer’s life.

It changed the very thought process and it wasn’t easy. There were quite few challenges and lesson learnt along the way. Those experiences are part of my presentation

Performance testing is a science and an ART is something similar to baking a cake and icing it. So we better make that as artistic as possible.

What do the Executives want?

User experience of their customers using the website to stand out and provide the best experience in terms of navigating, making any transactions etc.

ROI – Return on the Investment. As they invest on the newer technologies and provide more and easy capabilities they want their user base to increase and bring more business

Handle the market volatility: Markets in bear and bull modes impact economy across the world and these are times we have seen websites crashing and the systems coming to their knees. Not to mention the financial and credibility loss of the customers and the company.

And now the question to be asked is what makes you sleep so well like a carefree child rather than what keeps you up at night?

So in order to achieve these, we need to understand how important performance testing is for an organization and as performance QA what a great responsibility lays in our hands.

We all know the different phases in the performance testing life cycle. I would like to highlight the most Key phases which need a deeper understanding of the system and its architecture. Considering that, I found the Gather NFR, Design, Development, Analysis and Capacity data as the key phases in the cycle.

Those 2 involve collaborative work with the stake holders, DevOps, Ops. I could see the need of performance architect role to be responsible to conduct these phases 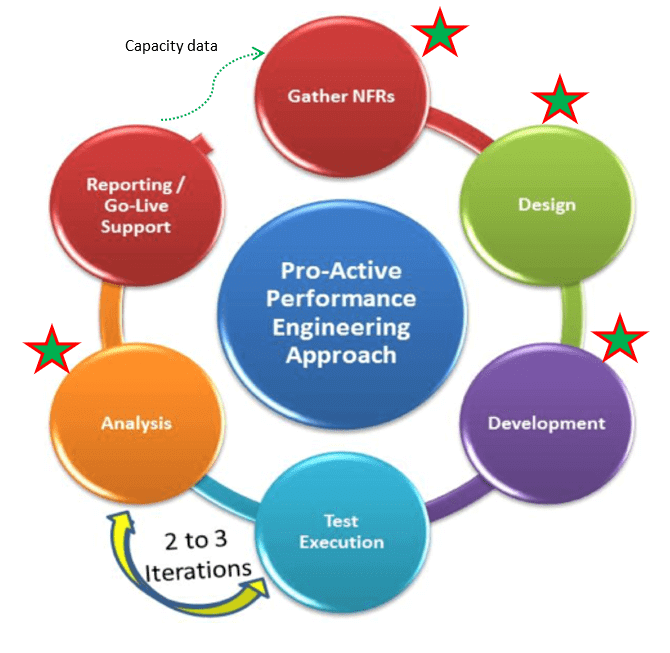 The Playbook for Performance testing Process

All phases of performance testing (mentioned in previous bullet) are followed except for the regression cases. Regression testing is performed based on the  type of changes the application has

By adopting Agile methodologies a close collaboration with Dev and team helps in early testing and finding bugs early in the cycle. Work along with Dev to help troubleshoot and fix the defects

Based on the type of scenario, the perf process customizes the process for fast failure and focusing on the particular change or functionality or capability which may also involve running particular types of tests

The most important part of performance processes is educating the team, stake holders and management on the performance concepts, terminologies like Avg TPS, 5 min Peak TPS etc and the process itself. This gives more clarity to others of our world and be on the same plane

The process we followed to do method level testing is to first build a DIT-PERF Env which is a VM pointing to the performance backends.  Perform a baseline on the DIT-PERF which is used to refer to the subsequent tests done for a particular method. As the methods or functionality are built and performance testing is done before the code is fully baked. Introducing Dynatrace into the mix gave great insight into the code behavior which helped both the parties. Definition of Done (DoD) greatly helps in defining exit criteria for the phase and avoids falling in the loop of fix, test, fix, test.

Scripting the flow is one which has immensely helped by moving to method level testing, although the robustness and flexibility of the script to be taken care of. Once the code is ready for Release build which is when the full-fledged performance testing begins in the performance environment. 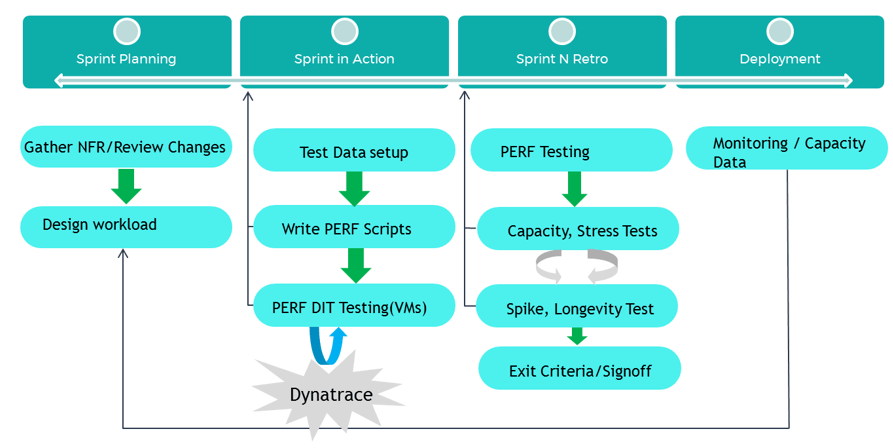 Importance of Results Analysis and Monitoring

Performance results analysis is an integral part of testing where we try to make sense of the tests executed. The results may be interpreted in various ways. Few things to consider

By adopting Agile methodologies, a close collaboration with Dev and the team helped in early testing and finding and fixing the bugs early in the cycle. Few points to consider on troubleshooting the issues

Having been looked at the analysis, monitoring and troubleshooting the next one is how these are represented in a report. Below listed are some ways of creating the reports

Collaboration within the Agile Team and the Stakeholders

The two teams depicted in the diagram with red lines are to be connected on regular basis to make the sure end product does meet the stakeholders and customer’s needs. 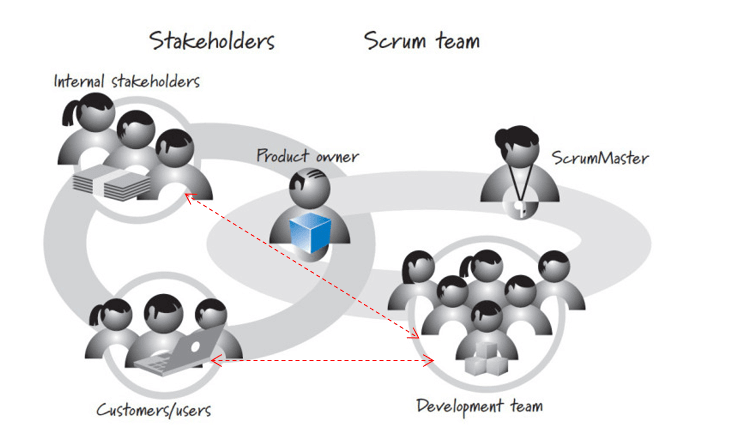 Retro’s after every Sprint closure is one of the powerful tools in Agile. With still fresh in memory, team review and reflect on the job well done and which needs improvement. Also recognize peers for their contributions, help and support during the sprint which forms a motivation and reenergizes the team member

The Retro’s also bought up a non-biased feedback, good, not so good. Action items which were included as part of the sprint to track down the status.

This religiously practiced process can bring and has bought a great deal of change in terms of processes, timelines and in one’s life as well. It demands disciple involvement in whatever one does.

To end with, the days are not far when AI takes care of most of the performance testing which feeds the results and gives the results of the test. It will be a matter of hours!!

Do you want to know more about this event? See Gayatree’s presentation here.