Mobile applications and mobile websites have become a major channel for conducting business, improving employee efficiency, communicating, and reaching consumers. In Part I of this article we discussed the differences between testing traditional and mobile applications, specific challenges associated with mobile load testing, mobile testing basics and best practices for recording mobile load test scenarios. In this Part II of the article, we will look at how to conduct realistic tests and how to best analyze the results.

How to Run Realistic Load Tests

Once you’ve recorded a mobile test scenario, you need to parameterize it so that it can emulate users with different identities and behaviors as it is played back to produce a realistic load on the server. This step is required for traditional and mobile web applications, and the tools used to complete it are the same. When playing back the test scenarios, however, there are several challenges specific to mobile load testing. 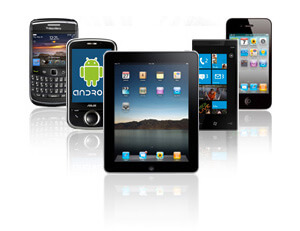 Today’s mobile devices generally access the server over networks that are slower than those used by desktop computers. Network conditions have a significant effect on the user experience, and the effect may be more or less pronounced depending on the application. Network characteristics including bandwidth, latency, and packet loss have a huge impact on client response times and on the way the server is loaded. By simulating different network conditions in a test lab environment you can forecast the effects of changes in the network infrastructure on the application’s performance. Doing so also allows you to discover application issues in the development cycle, therefore reducing costs.

For example, low bandwidth increases the time it takes to download a resource which then results in higher page load times. If the customer is connected longer, front-end servers hold sockets longer, load balancers have more active TCP sessions, and application servers use more threads.
Mobile networks have limited bandwidth and high latency compared to WiFi and broadband. Since the latency is a time added to each request and webpages are composed of many sub-requests, the time required to load a webpage on a mobile device greatly depends on the latency.
Limiting bandwidth and simulating latency and packet loss during a load test allows you to check that all of your users, including mobile users, will get the best user experience and acceptable response times while ensuring your servers won’t have problems under load. 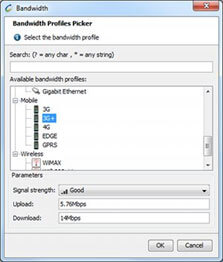 The bandwidth is directly correlated with how long it takes to download data from the server. The lower the bandwidth, the higher the response time. A server that provides acceptable response times for desktop users using DSL or another high-speed broadband service may deliver a poor end-user experience to mobile users with lower bandwidth.
It is important to validate your service-level agreements (SLAs) and performance objectives with tests that use the same bandwidth limitations as your users to avoid making decisions based on misleading test results. Such tests must incorporate bandwidth simulation, which is the process of artificially slowing down the traffic during a test to simulate a slower connection.

When load testing, effective bandwidth simulation requires the ability to individually limit the bandwidth for each user or groups of users, independent of the others.
Consider a situation in which you need to verify performance when 100 mobile users are accessing the server. In this scenario, you’d want to simulate 100 virtual users, with each user limited to a 1Mbps 3G connection. In this case, the total bandwidth for all users is 100Mbps (100 users * 1Mbps/user). Though it is possible to use WAN emulation software or a network appliance to globally limit the bandwidth for the load generation machine to 100 Mbps (or any other arbitrary limit), in practice this does not provide a realistic test because it does not impose a strict 1Mbps constraint on each user. Bandwidth simulation support must be integrated in the load testing tool itself to enable bandwidth limits to be applied to individual virtual users.
To conduct an even more realistic test, you’ll want to simulate a mixed population of users accessing your application with a variety of bandwidths. With a tool capable of bandwidth simulation on a per virtual user basis, you can determine the response times for users at each bandwidth across a range of bandwidths in a single test. This saves times when you need to compare the response times of web applications and business transactions for clients who have different bandwidth limits.

When a browser requests a resource from a web server, it identifies itself via the user-agent header sent with each request. This header contains information about the browser and the platform on which it is running. Servers use this information to deliver different versions of the content based on the client system. As noted earlier, many web applications deliver different content to mobile users and desktop users. Some further differentiate mobile users into subgroups based on information in the user-agent header, delivering less text and smaller images to devices with small screens. This can lead to bandwidth consumption and loading times that vary widely with the browser and platform being used.
As a result, the ability to manipulate the user-agent header is essential not only for recording test scenarios, but also for playing them back. Tools that lack this capability will fail to retrieve the appropriate content from the server.

Mobile browsers, like desktop browsers, can generate the HTTP requests needed to retrieve the static resources of a web page in parallel. Rather than waiting for each image to finish loading before requesting the next, this approach requests multiple images at once to shorten the overall page load time. To measure response times accurately, load testing tools must replicate this behavior by generating multiple requests in parallel. Moreover, they must simulate the appropriate number of parallel connections as this number may differ from one mobile browser to another. Again, tools that lack this capability are not performing realistic tests, placing the results they deliver into question.

Identifying the Most Appropriate Settings for Realistic Tests

Finding the appropriate values for key test settings — such as the user-agent, bandwidth, and number of simultaneous connections — can be a challenge. More advanced load testing tools can help testers set these values. For example, test scenario playback is greatly simplified by tools that can automatically inform the tester of which user-agent string and number of parallel connections to use based on the browser name, version, and platform. The process is further streamlined when the tools can suggest the most appropriate upload and download bandwidth settings based on the technology used (for example, Wi-Fi, 3G, 3G+, and so on) and the quality of the signal (for example, poor, average, or good).

You can use load testing with the cloud after (or in conjunction with) on-premise testing in the lab to improve the realism of your tests by generating high loads and testing from different locations, while saving time and lowering costs.

For consumer-facing apps and websites, it is often difficult to predict the number of users your applications will have to handle. Traffic spikes that result from a promotion, marketing campaign, new product release, or even unexpected social network buzz can be substantial. To generate a similar load in-house, you would need a significant investment in hardware. Using the cloud, you can generate the same high load using on-demand resources at a much lower cost.

Your web application’s real users likely access the server from many different geographical locations and use different networks. To properly validate the application and the server infrastructure, your virtual users should operate under similar real-world conditions.

When your real users are located outside the firewall, you should run your virtual users from the cloud to validate the parts of the application delivery chain that are not tested when testing from the lab, including the firewall itself, load balancers, and other network equipment.

Tools for Testing with the Cloud

While the cloud represents an opportunity to rapidly increase the scale and improve the realism of load testing at low costs, cloud testing is most effective when it used to complement internal load testing. Note that the primary factor in the success of load testing with the cloud is not the move to the cloud itself, rather it is the tool you select and how well it uses the cloud technology. In particular, it’s best to select a solution that is integrated with multiple cloud platforms, enables in-house test assets to be reused in the cloud, and supports realistic, large-scale tests across multiple geographical regions.

The default results of a load test are frequently delivered as averages. For example, load testing tools will typically show what errors occurred and the average response times for a request, web page, or business transaction regardless of the type of users being simulated or the bandwidth available to them.
Because bandwidth may vary widely for the different kinds of users simulated, the errors and response times can also vary widely. Taking an average of results with significant variation does not provide an accurate picture of what is really happening. To gain meaningful insights and to validate your SLAs and performance requirements for each network condition, it is important to go beyond the default results and analyze the results for each kind of user.

In many ways, mobile load testing is similar to load testing classic web applications. As a result, testers can leverage much of their existing knowledge and reuse existing techniques — like using the cloud for realistic, large scale tests. However, there are specific requirements for testing mobile applications that are not addressed by traditional load testing techniques. Recording mobile test scenarios, conducting realistic tests that simulate real-world bandwidth and browser characteristics, and properly analyzing the results are some of the key areas that require special attention for mobile applications. Addressing challenges in these areas is essential to ensuring mobile web applications are sufficiently tested prior to release and that they will perform well under load in production.