Mobile applications and mobile websites have become a major channel for conducting business, improving employee efficiency, communicating, and reaching consumers. In the past, mobile played a smaller role in business applications, so performance issues and outages were less of a concern. This is no longer the case. Today, performance problems with mobile applications lead directly to revenue loss, brand damage, and diminished employee productivity. Part I of this article discusses the differences between testing traditional web and mobile applications, specific challenges associated with mobile load testing, mobile testing basics and best practices for recording mobile load test scenarios. In Part II, we will look at how to conduct realistic tests and how to best analyze the results.

Application developers have long understood the need for load testing conventional desktop web applications to ensure that they will behave properly under load with the expected number of users. With the advent of mobile apps and mobile websites the principles of load testing have not changed. There are, however, challenges specific to mobile load testing that must be addressed by your load testing solution.

Since mobile apps and applications for desktop web browsers use the same underlying technologies, the good news is that most load testing tasks and challenges are the same. This means that you don’t necessarily need a brand new, mobile-specific load testing tool, but you do need a quality web load testing tool capable of handling the nuances of load testing mobile apps. Using a tool that enables testing of traditional and mobile web applications enables you to leverage existing in-house skills for designing and parameterizing your scripts, running your tests, and analyzing the results.

Aside from the similarities between traditional and mobile load testing, there are three key differences:

As you may know, a typical automated functional test for a mobile application emulates user actions (including tap, swipe, zoom, entering text, and so on) on a real device or an emulator. The objective of load testing, however, is not to test the functionality of the application for just a single user. Rather, the goal is to see how the server infrastructure performs when handling requests from a large number of users, and to understand how response times are affected by other users interacting with the application.

An effective load test simulates a high volume of simultaneous users accessing your server via your application. Using real devices or emulators for this task is impractical because it demands acquiring, configuring, and synchronizing hundreds or thousands of real devices or machines running emulators.

The solution, of course, is to use a load testing approach that is designed to scale as needed. With a client-based approach, user actions in the browser or the native application are recorded and played back. In contrast, a protocol-based approach involves recording and reproducing the network traffic between the device and the server. To verify performance under large loads, tools that enable protocol-based testing are superior to those that support only client-based testing because they can scale up to millions of users while checking errors and response times for each user.

The basic process for protocol-based mobile load testing is:

It appears straightforward, but there are challenges at every step. The good news is that these challenges can be addressed with an effective load testing approach. 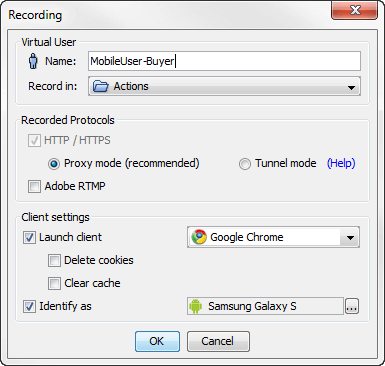 Because native apps run on your device or within an emulator, to record a test you need to intercept the network traffic coming from the real device or the emulator. 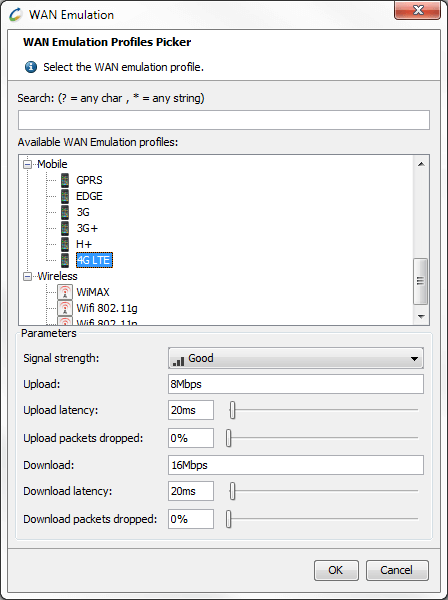 Most load testing tools provide a proxy based recorder, which is the easiest way to record an application’s network traffic. To use this approach, you need to configure the mobile device’s Wi-Fi settings so that the traffic goes through the recording proxy. Some mobile operating systems, such as iOS and Android 4, support making this change, but older versions of Android may not. Moreover, some applications connect directly to the server regardless of the proxy settings of the operating system. In either of these cases, you need a tool that provides an alternative to proxy-based recording methods based on network capture or tunneling.

Recording tests for web apps and mobile version of websites

Web apps use the same web technologies as modern desktop browsers. As a result, you can record the application or the mobile version of a website from a modern browser on your regular desktop computer, which is an easier and faster alternative to recording from the device.

Many web applications check the browser and platform used to access them. This enables the application, when accessed from a mobile device, to redirect to a mobile version of the content that may contain less text or fewer images. To test such an app from the desktop, you need to modify the requests to make them appear to the server to be coming from a mobile device. Otherwise, you will not be testing the mobile version of the application as the server may redirect to a desktop version. Some browser plugins provide the ability to alter the identity of the browser (by modifying the User-Agent header of requests). Support for this feature is also directly integrated in the recorder of advanced load testing tools.

Modifying the browser’s identity is not always enough. You obviously cannot use this approach to transform Internet Explorer 6 into an HTML5 compatible browser. The browser you use on the desktop must be able to parse and render content created for mobile browsers, so it’s best to record with a modern browser like Internet Explorer 9, Firefox 5, Chrome 15, or Safari 5 (or a more recent version of any of these if available). If the application includes WebKit specific features, you should use a WebKit based desktop browser, preferably either Chrome or Safari.

Obviously, tests for native apps cannot be recorded using a desktop browser. However, tests for many hybrid apps can. You may be able to directly access the URL used for the application, for example http://m.facebook.com for the Facebook application, and record your tests as you would for a classic web app.

There are additional challenges to consider when recording tests for a secured native application, that is, an application that uses HTTPS for the login procedure or any other processing.

By default, all HTTPS recording methods, whether proxy or tunnel based, are seen as man-in-the-middle attacks by the device. This raises a non-blocking alert in a desktop or mobile browser but it leads to an outright connection refusal in native applications, making it impossible to record the secured traffic.

The only way to record tests for secured native applications is to provide a root certificate that authorizes the connection with the proxy or tunnel. While this feature is currently supported by relatively few load testing solutions, it is essential for load testing any native application that relies on HTTPS.

Note: The root certificate must be installed on the device. This operation is simple for iOS devices; you can simply send the certificate via email and open the attachment on the device. For other platforms, including Android, the procedure is not as straightforward and may depend on the version of the operating system and the manufacturer of the device.

Once you’ve recorded a test scenario, you need to be parameterize it so that it can emulate users with different identities and behaviors as it is played back to produce a realistic load on the server. This step is required for traditional and mobile web applications, and the tools used to complete it are the same. When playing back the test scenarios, however, there are several challenges specific to mobile load testing and we will discuss this more in Part II of this article on “Best Practices for Load Testing Mobile Applications.”